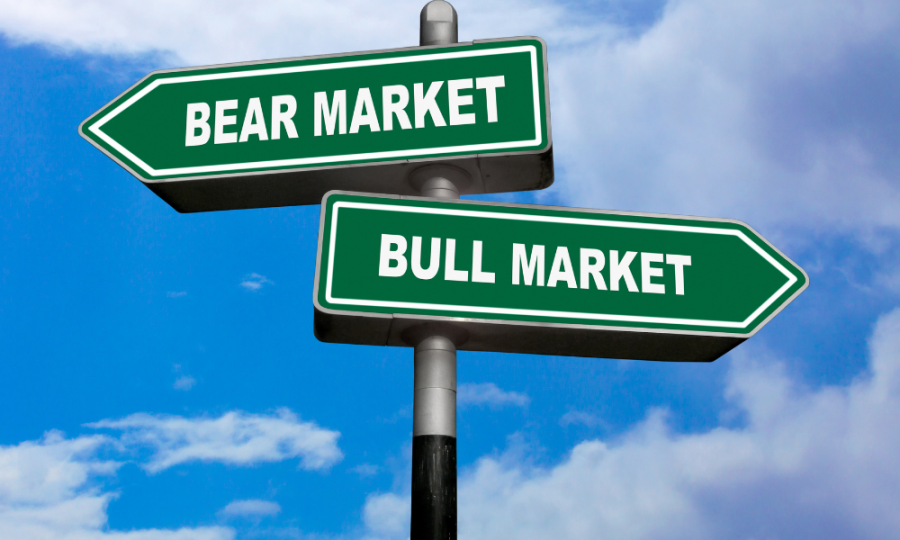 Many investment categories have been negative from the beginning of the year to now, including stock and even bond investments. There are many causes to the negative markets we have been seeing, including ongoing supply chain issues, the war in Ukraine, and the Federal Reserves’ continued interest rate hikes. There is much at work here affecting investments and we are all seeing the effects.

With the market deeply in negative territory, 2022 has officially been a bear market. A bear market is typically defined as a market that is down 20% from its high. Contrast this with a bull market where there is sustained growth in the stock market. In this post, I want to address some common investment questions that come up during a bear market.

“My account lost X amount of money. What happened?”

Nobody likes to see their account value go down. However, there are a few things to keep in mind. The first is that the market does not progress in a straight line. There are ups and downs every day, week, year, decade, etc. As much as we would like to just see our money continue to grow, investments just don’t work this way. Over time however, the market has historically continued to grow.

We should also keep in mind the psychological tricks that occur when investing. I think the picture above illustrates it well. We have Gary Green and Barry Blue who each invest $1,000. Barry Blue doubles his $1,000 to $2,000 and is thrilled. On the other hand, Gary’s money has ups and downs in the market, but eventually triples from $1,000 to $3,000. Then it falls to $2,000. Gary is upset because rather than focusing on his money doubling over time, he is focused on the $1,000 he ‘lost’ because his account used to be higher.

“What investment can I move my money into now that won’t continue losing value?”

Many retirement accounts have cash, money market, or stable value investment options meant to provide small returns with stability for your account balance. That being said, it doesn’t mean moving your money into these investments during a downturn is a good decision. Would you sell other items when their value is at a low point?

Think about your home value as an example. If you have seen the real estate market over a long period, you probably understand that the value of real estate has ebbs and flows. If you were going to sell your house, would you sell it when the market was at a low point? Likely the answer is no. You’d want to wait for the real estate market to recover before selling. Yet, we often struggle with this mindset with our investments. Depending on your time horizon, it may make sense to stay put with your current investments and make changes during a more stable period.

“Can’t I just reinvest my money into stocks when the market is going to start a recovery?”

Sure, but if you know when that perfect time is, I may ask to borrow your crystal ball sometime? Joking aside, the chart above is a great example that compares people who have historically stayed invested vs. those who attempted to time the market and miss some of the best days. The truth is no one knows when the market will begin a long-term recovery. In 2022 for example, the S&P 500 declined in value from about $4,800 in early January to about $3,700 in mid-June when a bear market became official. Then, the market rose to about $4,300 in mid-August. That might have looked like the perfect time to reinvest, after more than a month of market gains. Yet, after that, the S&P 500 fell below $3,600 by the end of September. Periods of volatility can be very unpredictable. Historically, however, those who stay the course in a bear market tend to fare better in the long run than those who attempt to time the market.

“I can’t think of a time that things have been worse! Surely the markets won’t recover from this.”

This fear can be a common sentiment among worried investors. While they recognize that market downturns have happened before, they still think ‘surely this is the worst yet’. In actuality, many previous market downturns were much worse.

Take for example, the financial crisis of 2007 – 2008. The S&P 500 was down 57% from its high point to its low point during that time. Compare that to now, where the market is down about 25% from its high to low point this year (Source: JPMorgan Guide to the Markets Q4 2022). While still not fun, we should keep in mind that downturns are normal in the investment process. Comparatively, this correction has been milder compared to other historical examples. What happened after each of these historical examples? The market recovered to its previous high and continued to grow. The only thing that we do not know for sure is how long it will take.

For historical perspective, the average length of a bear market has been about 289 days (Source: Hartford Funds as of 12/15/21).

I hope this perspective gives you some context for what is going on in the market and helps you to make informed investment decisions. I would summarize with these bullet points:

As the saying goes, this too shall pass.

* The information provided is for general information only and should not be construed as advice. Please consult with your financial advisor in regards to your own account.